Within The Giant’s Reach Tour Dates And EP Pre-Order

San Antonio-based WITHIN THE GIANT’S REACH will be unleashing their debut EP “In The Beginning” on May 11th.  Already revealing their debut single “Faceless”, the quintet is proud to announce their aggressive, motivational, hard-hitting lyrical metal will be hitting the US Midwest during May and June, which includes a hometown show (all dates listed below).

Making music courageously drawn from the present, inspired by the reality of the world that surrounds them. Theirs is a firestorm of fury, a searing sonic symphony of songs from the heart dealing, in songs likes ‘Scars’ and ‘Faceless’ with such subjects as bullying and internet trolls. Overall with songs like ‘Rise and ‘The Summit’, WITHIN THE GIANT’S REACH make music of strength, self-belief and empowerment, which will all be featured on their debut EP “In The Beginning”, which is now available for pre-order via the band’s Bandcamp here and Big Cartel here.

“We are stoked for fans to hear the new EP and feel the energy. We want it to wake them up inside. We want to inspire them to conquer their Giants and to do great things. No matter how hard it gets…Move forward! You only have one life, so live it! We want to project our drive, our reach for heavy brutal music, bringing back lyrical song-writing.” 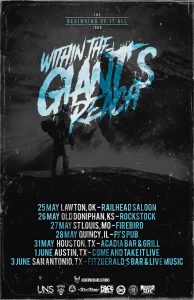