For those unfamiliar with your band, please give a brief one liner about your sound and a quick FFO.
For fans of old school metal like Megadeth and Pantera with some modern influences like Revocation. We like to thrash but break it down with some sweet grooves.

What was the writing process like for your album?
For this EP, Jp (bassist) had some songs already composed that he showed us. We started jamming them out and ‘Watcher’ and ‘Anti-Life’ were one of the first ones that came together. ‘We Want Blood’ was cool to write because we kind of left that one for last and just jammed it out one day. I added some blast beats to it and it came together really quickly.

What do you think sets your band apart from the rest? What does Revenger bring to the table that no one else does?
I think the combination of all of our influences has created a sound that is familiar but still goes in unexpected places. We are inspired to thrash and go fast but we like to break down a groove and dig into a rhythm. I think that’s where we create our distinct sound, when we contrast those extremes.

What sort of things inspire you to create music?


For me, I really enjoy performing live and always feel energized after a show so that is usually a good time for me to write drum parts. But we also will go to our jam space and just jam, see what we come up with. Inspiration can come from so many outside factors and what everyone is going through in their life. I’m inspired by other musicians and bands and seeing them do cool things but most of the time if I listen to an album a lot, I definitely will be, even subconsciously, inspired to write music or drum parts after.

How do you feel about the current state of the music industry, in particular streaming services, “illegal” downloads and such?
From my experience, the music industry is tough. There’s a lot of effort and money that goes into creating, recording, distributing and marketing a piece of music and the return can be very slim. I think bands are starting to find ways to adapt because in the end, nobody wants to stop making music, and nobody wants to stop listening to music. It is a bit tough when a lot of revenue that could be coming in from paid downloads gets lost but on the other hand streaming services and Youtube means bands can get a lot more exposure. I think the result of this has been that there is a lot more interaction between bands and fans. That interaction I think is what makes a fan go from just listening to a band on spotify, to actually buying a record or going to a show. I think the industry has just shifted from being enigmatic with rock star appeal, to something a lot more personable and interactive. You don’t have to purchase an album to hear it, but you’re more than welcome to if you want to support a band, so it’s more important now to have a lot more presence on social media and be a bit more creative about how you present you music.

If you could share the stage with any other musician (dead or alive), who would it be?
For me personally, I would love to just stand awkwardly next to Tomas Haake and watch him play drums. If we’re talking fantasy then ya, Meshuggah or Megadeth (Marty Friedman and Nick Menza era). We played a small opening slot for Havok but playing with Revocation would be really sweet. 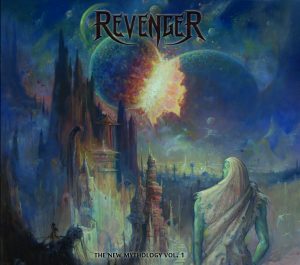 Fast forward 5 years from now, what’s Revenger doing?
I would like to see us playing festivals in Europe, Asia and all over he world and build our discography. We’re pretty simple, we just want to make music and take it around the world. But one dream is to have a personal studio where we could record pre pro and play around with sounds and ideas.

Craziest thing you’ve ever done together with the band?
Not even 2 months before we were supposed to go on tour with our buddies in West of Hell, the singer in their band found an awesome deal on a tour bus and just decided to buy it. He fixed it up and I went and helped rip it apart and clean it up and it was good to go just before we had to leave.

Thanks for your time, anything else you’d like to add?
Thank you! I would just say we released our EP ‘The New Mythology Vol 1.’ on Feb 17th so it’s out now, you can download it on Bandcamp and we released a video for ‘Hex’. You can check it out on Youtube. We will also be announcing a tour very soon so check us out and like us on Facebook to keep up to date.