Los Angeles-based Calcemia are a five piece death metal band that merges the sentiment of classic death metal with the anomalous, creating an enthralling atmosphere chockfull of grooves, complex riffs, and blasting ruptures. Showcasing a strong sense of musicianship and seamlessly pairing weirdness with brutality, their 2017 debut EP “The Unburning Flame” is not something you want to skip on. Providing roughly thirty minutes of brutal, catchy, and dissonant death metal, this debut EP already reflects a highly-developed style and atmosphere that will surely bring Calcemia more attention in the metal underground in the near future.
The dudes in Calcemia (Jake Himelfarb, Devlin Baldwin, Alec Cordero) were cool enough to answer some questions for a quick interview to better understand their craft, inspirations, and the LA metal scene. Check it out below:

In a couple brief sentences, how would you describe Calcemia’s sound?
Devlin: I call it weird death metal. We’re inspired by bands from the 90s that stretched the boundaries of death metal, while still keeping it crushing and heavy. Xysma, Carbonized, Demilich, Atrocity, Ripping Corpse, Dark Millennium, to name a few. Bands that didn’t stick to a formula and showed they weren’t afraid to try things and be creative. We are only taking a mere step into that now as a band. We’re trying out what we can and it seems to be progressing and getting better.

Jake: Calcemia is a band that embodies our fascination with the unorthodox in death metal. We were always enthralled by classic bands, and the ones that resonated with us the most were the ones that did something different and stood out. We want to be like those predecessors.

Alec: Calcemia to me is the amalgamation of the old and the new extreme metal sounds with our own warped twist to the genre. We want to confuse, disgust, yet entice the listener, but more importantly, we intend to make a brand of bizarre, other-worldly death metal that reflects our deep passion for music and for writing catchy and memorable songs.

What was the writing process like for “The Unburning Flame”?
Jake: For the most part, I would either come into a session with riffs or Devlin and I would make up riffs on the spot. Then Devlin and I went part by part and continually refined everything. When we had a full song written, we’d bring Yuri in to write vocal parts / lyrics.

Devlin: Jake and I started by writing a couple songs together riff and structure wise. Those are the two I contributed to as far as guitar goes. Most of the music writing for the band up until now has been done by Jake and I, as we’ve been playing music together for years now. Lyrics were written by Yuri.

I so appreciate the production behind your guys’ EP; it sounds so organic and honest, which makes the EP even more spectacular. Did you guys start the recording process with this overall sound/production style in mind?
Jake: I was aiming for this production style to an extent. I really like organic production akin to that of producers like Colin Marston. I was introduced to his recordings when Gorguts released Colored Sands. I love everything about that album, but the organic production always stuck with me. I knew about this local band called Teeth, and their music is also very Gorgutsian. It turns out that their guitarist has a studio, so it was logical for us to come to him with that in mind.

Devlin: We had a basic idea of what we wanted, but it all really felt like an experiment. We went back and forth many times with the sound of the record, with the strength and knowledge of our sound engineer for the record, Erol Ulug. It was an amazing experience and one of the greatest joys of my music career so far. 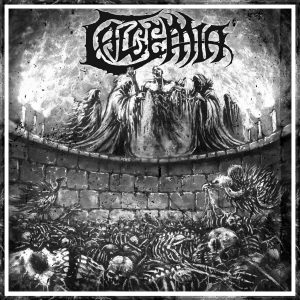 Musically and non-musically, what are a few of your guys’ inspirations for Calcemia?
Jake: I would say my two biggest outward influences in this band are Demilich and Voivod. Antti Boman and Piggy’s riffing styles are written all over this EP. I have no shame in that. As I said earlier, the bands that took bold steps to make something different, like Confessor or Dark Millennium are our biggest influences. Even if not on a direct musical level, they do in my songwriting approach.

Alec: When it comes to writing riffs, I primarily take influence from old school death and thrash metal that comes from the 80s and 90’s. A few bands include Adramelech, Disincarnate, Human Remains, Nocturnus, and many more. For guitar solos specifically, I’m mainly inspired by shred and fusion players like Tony MacAlpine, Greg Howe, Pat Metheny, Al DiMeola, and more.

How do you feel about the current state of the local underground metal scene in Los Angeles? What are some positives attributes of the local metal community, and, if relevant, what do you think could be improved overall?
Devlin: I see our metal community growing rapidly, its pretty awesome. LA has had its ups and downs for underground music. Not a whole lot of all ages or DIY spaces left, which can be difficult for kids trying to find a passion for extreme music, and a lot of the shows here are 21+. However, there are a few promoters working their asses off to bring killer local and touring bands together for shows and I’ve only seen it getting better. Shouts out to Church of the 8th Day, The Elegy Ensemble, Born for Burning and Hate War Productions.

Jake: The local scene here is actually pretty dope! I used to think it wasn’t so, but I was too young to go to most Elegy Ensemble or Church of the Eighth day shows. Recently, it seems like there has been a lot more death metal here. I think a lot of the bands are putting out some really sick stuff, and I’m always excited to see a new band for the first time.

Alec: That’s a very good question. Before I say anything further, I’m going to stress that I’m merely speaking for myself here. On one hand, the underground metal scene here has never been better in that there are big and small shows practically everyday and there’s definitely no shortage of music to be found. I think LA has a very strong position in the international metal world and it will only get better from here on out. However, I think there could be more diversity in the sounds of bands coming out lately. I’d be interested in seeing more experimental and avant-garde bands that aren’t afraid to defy the laws of tradition (cheeky Primus reference) regarding extreme metal. Also, it’d be cool to see more European-style fests like Strike Fest since I’m sure the city’s scene in general would appreciate that a lot. Other than that, I think LA is reaching a metal renaissance of sorts in that people are more passionate about this style of music than ever. That in itself is exciting beyond words.

Thanks for your time! Anything else you’d like to add?
Jake: Thank you for taking the time to write us up, we really appreciate the questions and that you care about our music!

Devlin: Keep it weird, Keep it heavy, Try something new. Thank you!

Alec: Check out “The Unburning Flame” if you haven’t done so yet. We’re writing new material for a split and a full length album, both of which are sure to be filled with crazy riffage, twisted rhythms, vicious vocal attacks, intricate solos, and other sorts of mindfuckery for the masses. Come check us out at a show, hang out with us, and hit us up online. As always, thanks for the support and be sure to eat your vegetables.

Check out “The Unburning Flame” at https://calcemia.bandcamp.com/album/the-unburning-flame
and make sure to follow them on Facebook to keep up with future releases!

For Fans Of: Gorguts, Pestilence, ‘None So Vile’-era Cryptopsy