Fans of old school epic doom will want to take note of one of the brightest up and coming bands in the genre. That band is Godthrymm. I’ve taken a moment to chat with Hamish Glencross, who many of you may recognize from his time in My Dying Bride or from his current duties in Vallenfyre. Godthrymm’s debut EP is slated for release on April 6th, 2018 from Transcending Records (on CD). 12″ Vinyl is also in the works from Cosmic Key Creations.

For those unfamiliar with Godthrymm, please give a brief one liner about your sound and a quick FFO.
Hi, we’re Godthrymm and we play crushing epic, doom metal. If you like Black Sabbath, Candlemass, Cathedral, Pallbearer, or indeed any of our previous bands, then you might like this new outfit.

The name Godthrymm, where’d that come from, what’s it mean?
Chaz brought the name to us not long after we had started jamming together, it means Divine Majesty. It’s originally spelt with an old English runic character instead of the “th”, but we wanted to make it more search engine friendly. The most important thing to us was that the bane hadn’t been taken already! That’s the hardest bit of starting a new band now; all the names are taken!

The members of Godthrymm are veterans of the metal scene. How about a quick summary of the backgrounds for each of you.
Well, I joined a band called Solstice, which at the time had Shaun on drums and Chaz on bass. Shaun had previously drummed for a sludgy hardcore band called Ironside, and Chaz was/is an old punk who had originally been singing for Criminal Justice, then crossed over to playing guitar in a thrash band called Karrion. We were in the band together for a while, then Shaun left to join Anathema, then later My Dying Bride. Me and Chaz did an album called New Dark Age, did a few shows, then I left to join Shaun in My Dying Bride. I was with them for 15 years, during which time I also started playing in a new band called Vallenfyre with Greg from Paradise Lost. Rich is from Malediction; one of the first UK death metal bands, and he also plays in Monstrance and Bastardised (also with Chaz). 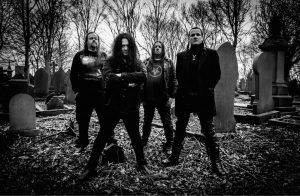 What was the writing process like for your album?
Very different to what I’ve been used to doing for the last few years. We were insistent from the outset that we were going to be writing everything together in the rehearsal room; trying out ideas together, and ensuring that everything was a joint effort. It was an absolute joy to be writing this way, rather than just at home independently, recording onto home recording software. We were determined at first that we would try any idea regardless of style, and toyed with some thematic ideas, but ultimately things really started rolling when we focused our vision onto what comes most naturally for us; and that is this kind of doom metal.

What do you think sets your band apart from the rest? What does Godthrymm bring to the table that no one else does?
We are the sum of all our different parts. We have a lot of experience in different bands, and a lot of history together. We have a strong bond that shines through our music. We truly are a brotherhood, and it is proving a most wonderful journey since reconnecting. We would love for you to come and share this with us.

What sort of things inspire you to create music?
Love, hate, life, death…. music is the ultimate catharsis for us. We can reflect on loss and regret, or we can celebrate and conquer. It is all reflected in what we write. We’ve been round the block a few times now, cracked a few teeth and gained some scars. Our writing is a reflection of all of that.

I know, like myself, you’ve got a couple of kids and a wife at home. How do you find the time to partake in multiple bands?
I have an incredibly understanding wife! I was on tour with Vallenfyre for a couple of months before our wedding, only returning a couple of days before. I’ve risked missing the birth of children because I’ve been away. It’s a hell of an undertaking for her, so I’m very lucky!

How do you feel about the current state of the music industry, in particular streaming services, “illegal” downloads and such?
It’s certainly changed the face of the industry, and the historical business model. On one hand you can connect with people like you’ve never been able to before, but it also unfortunately can mean people can be less willing to take a risk and invest financially in a band. And that can come at the cost of a band continuing. I’ll be watching intently at how the industry has to adapt to survive.

If you could share the stage with any other musician (dead or alive), who would it be?
I’d love to jam with Pallbearer again. I’ve played bass with them a couple of times now, and we’ve spoken about the fanciful idea of me joining them onstage to do a song with them as a three guitar lineup. It would be amazing if we ever get to make that a reality. I love them as a band and as dear friends. 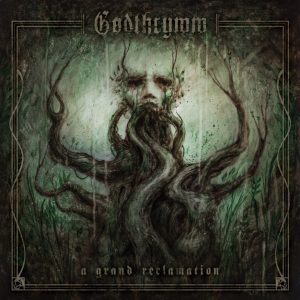 Which albums are in your top 10 right now?
I’ve just gotten into 40 Watt Sun and am listening to Wider Than The Sky right now. Pallbearer’s last album is amazing, as are the other two, which I still listen to frequently. Constant long term favourites include White Chalk by PJ Harvey, Golden Shroud by Rose Kemp, The Serpent’s Egg by Dead Can Dance, Hard Volume by Rollins Band, Sounds of the Animal Kingdom by Brutal Truth, Paranoid by Sabbath, Nightfall by Candlemass… I listen to music all the time.

Fast forward 5 years from now, what’s Godthyrmm doing?
I hope recording album number three! With some great gigs and great experiences behind us.

Thanks for your time, anything else you’d like to add?
Thank you. I’m just having the most wonderful time in this new band. Not only with my old friends in the band, but everyone I’ve already met as a result, and everyone that has helped us out so far. It means so much and thank you to all. Buy a copy of our new EP and read the whole thanks list there! Heh!