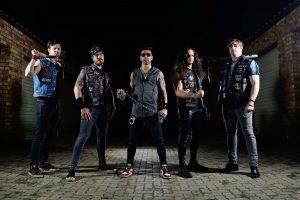 Vocalist Jessy Switchblade comments on the inspiration behind the track – “This was one of the first
tracks we wrote and most probably our most straight forward track. It has an ‘AC/DC / Biker rock’
kinda feel. I had written a poem about a goth girl who returned to her home town to kill all the girls
that bullied her in high school and Raven had written a song that needed words. I brought the poem
to his house, he thought it would fit the tune perfectly and an hour or two later we had us the
‘Bloodbeast’ a song about revenge and retribution.” 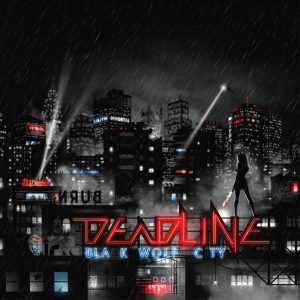 The video has real DIY approach it to it as Jessy goes onto explain – “The video was shot and directed by our good friend Marius “Spielberg’ Els. He has a bunch of video equipment which he never uses
so whenever we need to shoot stuff we rope him in. It is therefore an amateur shot music video, all
done by us and Marius. It was filmed at a good friend’s house. He has a basement that overlooks his
pool that has a mini stage and bar here he hosts parties and in fact that is where we played our first
live show ever. We roped a few good and close friends in and they joined us for the shoot. We had
to change the idea at the 11th hour as we had a couple of cancellations. The idea was for five girls to
enter a private party and go on a killing spree thus killing the band and each girl grabbing an
instrument and finishing up as Deadline but with two last minute cancellations we changed the idea
a bit but stuck to theme of a girl or girls entering a private party and killing the band. We have three
with one central girl being the ‘Bloodbeast’ and she has two accomplices who are waiting for her at
the party with their ‘pimp’. She beats the bouncer up and a patron who tries to flirt with her and
then ‘collects’ her accomplices’ who then get up on stage and kill the band. We had a lot of fun
shooting this and we are very happy with how it turned out. (All things considered)”