A Gear Q&A With Devin Holt of Pallbearer

What was your first guitar, and do you still have it?
My first guitar was a cheap, black Epiphone Les Paul. It had a bolt-on neck and EMG pickups. I don’t personally own it any longer, but I passed it down to my younger brother, and I believe he still has it. I got the guitar from my uncle, so it’s cool that it has remained in my family for so long.

You’ve gone through a lot of guitars over the years. How many of them have you kept?
Up until this year, I was in the habit of keeping all of my guitars, mostly. I was getting close to having a dozen of them around at one point, which is kind of ridiculous given the amount of space/fingers that I have. Collecting has never ever been a vanity thing. I honestly just enjoy playing different guitars throughout the week. And why not? Different guitars have different vibes, and sometimes if you’re lucky, you’ll match up with the right guitar on the right night, and something cool happen will happen.

What was your dream guitar as a kid?
My dream guitar has remained unchanged since I began playing. It is Billy Gibbons’ 1959 Gibson Les Paul, the “Pearly Gates.” I would never want to take his from him, but if I could have an identical version, I would be set for life, I think. That guitar is perfect in every single way.

You changed from 6 strings to 7 strings; what prompted this change?
I like to keep things interesting, especially when we are diving headfirst into a long touring cycle. Switching it up does invite small headaches of course, but playing new gear and trying different approaches motivates me to keep going, so why not? Plus, there aren’t as many players using seven string guitars for what I do, so I thought it might be interesting to give it an honest try. I’m glad that I did! It didn’t take long to adjust, and I have to partially attribute that to the necks on my ESP guitars. For my hands, they are incredibly comfortable to play. Seven string guitars allow me to have a standard, 6 string guitar on tap (EADGBE), as well as a lower “A” string for heavy rhythm playing (AEADGBE). Now, if I wanted to, I could play a show with Pallbearer, which is tuned to drop A, as well as a Jimi Hendrix cover band, without having to worry about changing guitars or tuning. That’s a big plus for me. 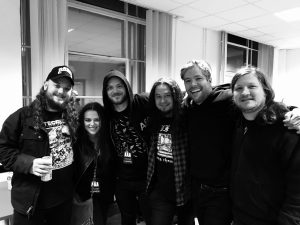 What’s more important to you; your own guitar, amp or effects?
Having a really solid amp is most important to me. Plenty of crappy guitars still sound pretty good though a strong amp. Run a cheap Les Paul clone through a great vintage Plexi, and oftentimes you’ll be surprised at how good it can sound. And although I am addicted to effects pedals, so many wonderful players have gotten along without using them. Pedals aren’t for everyone, obviously. From my experience, even wonderfully voiced guitars do not typically sound very good through shitty sounding amps. In most cases, buying good amp is pricey, but it’s absolutely worth the investment.

What piece of gear have you had the longest that you still use?
I have been using the same Orange Rockerverb 100 MKII since 2014, and it’s an absolute beast. It has survived some truly insane shenanigans, and has gotten me through so many shows at this point. Not only does it sound great, but it’s built like a tank. I think Orange is a classic example of pay a little more now, get a lot more later.

What is your most favourite piece of gear (guitar, effect or amp) that you currently use?
Right now I am obsessed with my Boss ES-8 Switching System. It has changed my life both as a performer and a songwriter. Performance wise, it allows me to program all of the changes in our songs, so that when it’s time to change pedals/settings, I just hit one button. No more multiple-pedal tap dancing, no more accidentally turning the wrong pedal on/off, no more guessing. Songwriting-wise, the ES-8 allows you to change the order of your pedals on the fly, which is great for experimenting with different sounds and textures. The parallel routing feature lets you send different pedal chains to different amps, which is great for experimenting, especially with delays and reverbs. It’s the coolest affordable piece of gear on the market right now. A true game changer, and when compared to other switchers like it, worth every penny.

What’s the worst/most disappointing piece of gear that you’ve owned?
I saved up a bunch of money when I was a kid to buy a Krank Krankenstein 100 watt head. At that point, everyone was playing them; Metallica, Arch Enemy, Dimebag. The guitar magazines were swooning all over them. When you’re a 15 year old, that’s enough. Ultimately the thing sounded like dog shit, and it seemed like I’d lost a small fortune at the time. I will say, however, that those heads can produce THE iciest black metal tone imaginable. If that’s what you’re going for, I’d suggest trying one out. They aren’t going for nearly as much these days. Shrill em All!

Have you any advice for young guitarists starting out?
Learn music theory, listen to all kinds of music, and find what is good within every song. Be weird.