Affasia have come seemingly out of nowhere with their unique brand of atmospheric metal. Their debut EP Adrift In Remorse is due out Feb 23rd. Pre-orders for the CD are available at Transcending Records website here.

For those unfamiliar with your band, please give a brief one liner about your sound and a quick FFO.
Noah: Dark, atmospheric metal with elements of Darkwave, Doomdeath and Shoegaze. For Fans of Katatonia, Swallow the Sun and Hanging Garden.

What was the writing process like for your album?
Noah: It was a bit complicated but I’ll try to summarize. David and Jason started writing most of the material about a year or so before I joined the band. Nick, Josh and I joined and we started rehearsing and fleshing out, bass, drums and vocals respectively. Over time and lineup changes the songs evolved. The songs evolved further after starting recording with Tony. He wrote his version of the drum parts and once guitars were recorded we sent the tracks off Adam so he could finalize his keys. It wasn’t until we got those back that I truly finalized the vocals and production began. 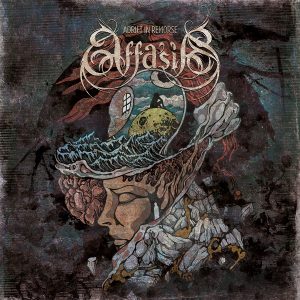 What do you think sets your band apart from the rest? What does Affasia bring to the table that no one else does?
Noah: I believe that Affasia is unique in its Melancholic atmosphere, dynamic tonality, and our wide range of influences that form our sound. Namely the Darkwave Shoegaze and classical elements that we plan on exploring further while creating our unique brand of death/doom. And I believe the clean vocals juxtaposed by the death/doom growls and screams is something that not many bands bring.

What sort of things inspire you to create music?
Noah: I think we all just love making music that we enjoy but what inspires me to create is the fact that music has always been an outlet for my creative energy and emotions that no other format has provided.

How do you feel about the current state of the music industry, in particular streaming services, “illegal” downloads and such?
Noah’ It’s a sad state of affairs but it is unfortunately the music world we live in. I try to embrace the digital format while encouraging collectors, like myself, to support bands and labels by purchasing physical copies of albums, merchandise, show tickets, and even donating to Kickstarters. Some bands have created membership communities for their supporters to support them being full time touring bands and the supporters have ongoing access to exclusive materials, tickets ect. Ne Obliviscaris from Australia was the first example of this being successful that I was aware of. Withstanding some controversy.

If you could share the stage with any other musician (dead or alive), who would it be?
Noah: It’s been a dream of mine to play a show or tour with Swallow the Sun. I’ve been following the Finns for some time and they’re amazing musicians that I respect and enjoy spending time with.

Fast forward 5 years from now, what’s Affasia doing?
Noah: Hopefully we’ll be playing some shows, maybe a Transcending Records festival, and writing new material. Getting along would be great too. Ha.

Craziest thing you’ve ever done together with the band?
We’re not much of a crazy outing group, which may change. We have gone to movies and lunch several times. Wild, I know.

Thanks for your time, anything else you’d like to add?
Noah: Thanks for your interest and if you haven’t listened to Adrift In Remorse or perused Transcending Records yet please do so and drop us a line. Cheers.