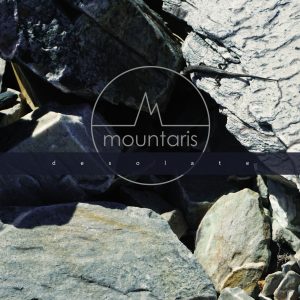 For those of us that have been around the metal scene for a few years (or 20+), it’s rather difficult to find a band with a sound that isn’t something that we can say “they sound like [some band]” or “they sound like a mix between [some band] and [another band]”. Plain and simple, most metal bands sound like other metal bands. I love metal, but these days metal has far too much of a tendency to become incestuous within the metal world. More often than not, It’s people listening to metal and then playing metal. It’s metal cannibalism and for the most part it’s boring and stale.

Enter Mountaris. Desolate is the debut EP from this doomgaze band from down under. When it was first brought to my attention, the label “doomgaze” is what struck me first. I’m a big fan of both doom and shoegaze. I like some blackgaze too. But this was the first time I’d seen the term doomgaze used to describe a band. From the moment Desolate (the EPs title track) begins droning in, to the final retreat of Tidal Waves, I’m captivated. And honestly, I’m not certain “doomgaze” is really the best term for a band such as Mountaris. There are undeniable elements of doom present in the guitar work. But the overall feel of Desolate is more uplifting and blissful than you’d expect to hear from a band playing doom. The ethereal feeling typical of shoegaze is strong on this EP. The vocals are entirely clean, which may turn off some extreme metal fans. Their yearning melancholy delivery suits the sound of Mountaris to a T and unlike a lot of shoegaze bands, they never outlast their welcome.

How does Mountaris fit in the metal world? The truth of that is, I’m really not sure. They simply do not sound like any metal band I’ve heard. They incorporate elements of doom, but they don’t sound like any particular doom band. They incorporate elements of shoegaze, but they don’t sound like any particular shoegaze band. Who are these guys, and how have they pulled this off? They are Mountaris. And they are magic men. And while the word desolate would generally describe something hopelessly empty, this short EP called Desolate is a beautiful example of the sort of hope that a jaded metalhead can still occasionally find in the obscure and unknown world of metal.  This would be perfection if only there were more of it.