For those unfamiliar with your band, please give a brief one liner about your sound and a quick FFO.
Gatekeeper plays heavy metal in the epic tradition. Fans of Dio, Manowar, Savatage, Manilla Road and Solstice should take note.

What was the writing process like for your album?
The album is a mixture of old songs that have been previously recorded for smaller-scale releases, older songs written by myself from years ago that were arranged by the current lineup, plus totally new songs that were written by the band as a group. Generally, someone starts with a handful of riffs or melodies to build a sketch of a song and the rest of the band will jump in to help edit the song or contribute additional ideas. I used to write all the lyrics but our singer JP is doing most of them now.


What do you think sets your band apart from the rest? What does Gatekeeper bring to the table that no one else does?
We’re a bunch of dudes who wear our influences on our sleeves but seek to internalize and revere our influences as opposed to be pastiche pretenders. We try to capture the myth and magic of the old, eastern hemisphere while remaining true to the rough and wild stylings of our North American roots.

What sort of things inspire you to create music?
All art forms are an inspiration to us—fantasy illustration, old maps, Ronnie James Dio, Robert E. Howard stories, sword and sorcery films and old mythology. The people we love the most and the people we despise. The fiery sound of the electric guitar is my personal biggest inspiration.

How do you feel about the current state of the music industry, in particular streaming services, “illegal” downloads and such?
Sometimes it’s frustrating to see the musical art form taken for granted and devalued while being so easily available. However, the fact that my music can be heard and enjoyed by anyone with an internet connection makes me feel pretty good about it. It’s become less about “The Dream” and more about honour, personal sacrifice and sometimes simply having fun with it. 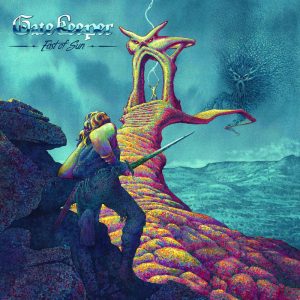 If you could share the stage with any other musician (dead or alive), who would it be?
I would love to tour with SAXON. Every gig would be a masterclass. One of the best live bands of all time!

Which albums are in your top 10 right now?
My tastes are a weird mix of heavy metal and jazz fusion (anything with strong guitar playing) but here’s what’s in my stereo these days:

Fast forward 5 years from now, what’s Gatekeeper doing?
Hopefully on tour or writing/recording the next album. No rest, no repose!

Craziest thing you’ve ever done together with the band?
When we restarted the band with the current lineup, we put together a west coast USA tour in less than three months and our singer JP drove 40 hours from Detroit to Vancouver, caught pneumonia in the process. We played 4 shows opening for the NWOBHM band SATAN with zero sleep and one rehearsal. We did the tour without visas and almost got completely screwed over at the border on our way home. We could have gotten into some serious trouble. Our singer actually got held up at the border and wasn’t able to enter Canada until some time later.

Thanks for your time, anything else you’d like to add?
Never surrender! Thanks so much for the questions!