Okay, okay, I’m late and this time, it’s my fault, but better late than never. I am going to keep things simple this week. My last two diatribes were very long and I want to return to a lighter tone this week. I’m also going to be posting music reviews throughout the week, so fear not, you will have content!

My first question was asked of me by several friends. Paul T, Eric P, and Walt C all asked me, “Matti, what do you think of the new Roseanne episodes?”, and I said, “I’m not thinking about them.” It’s nothing personal and it’s not a boycott or anything, I’m just not interested in her the same way I am not interested in other comedians whose cheese has fallen off their crackers a long time ago. I regard Roseanne Barr the same way I do Victoria Jackson, or Dennis Miller, or even that tryhard Greg Gutfeld.  I’ve got better things to spend my time on.

However, my friends were persistent and wanted to see what I thought about how she has integrated Roseanne Barr the person with Roseanne Conner the character. I could not very well offer an opinion without watching, and so, in the interest of journalism, I peeked the first 2 episodes of Season 10.

The show, the tone, everything about it just doesn’t feel right. It feels like Roseanne from an alternate timeline a la Back to the Future 2. This whole current timeline feels like that, like we’re not supposed to be here and somewhere in the past, our real future was derailed. Sometimes I wonder if someone gave Donald Trump a flux capacitor and a sports almanac from 2015. Either way, this feels so wrong to me and here are a few reasons that jump out at me as to why. 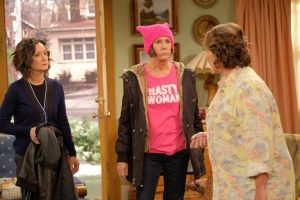 Are you fucking kidding me? What balls Roseanne has to send that message to folks still dealing with strained relationships between family members and/or friends.  What does it say to have a gender-nonconforming child on the show, or a young black girl who plays DJ’s daughter, and yet express support in character for a president who has worked against trans rights and has constantly denigrated people of color? Roseanne’s dismissive comment to Jackie about “taking a knee” instead of saying grace, without comeback or context, was a dig at black athletes who are silently protesting the injustice that little girl is going to face in life. Roseanne just sent a message to millions that once again, it’s cool to be casually racist, especially if it gets ratings.

I could go on about Roseanne, but I’ve given her far too much attention as it is. The show does have bright spots and funny moments. I like how they wrote both Beckys into the plot. I like how Darlene is portrayed as a struggling mother. I think Mark is stealing the show right now, and I hope his character breaks through to some of Roseanne’s new fans and helps them overcome their prejudices against transgender, nonbinary, and genderfluid people. Yet, I think that the damage caused by the desire for nostalgia and the normalization of the Trump Effect, as well as the suggestion that those of us affected by it owe Trump supporters an apology for setting boundaries, is patently offensive. I don’t need to watch this show ever again. It’s not a boycott, I just don’t want to watch it the same way I don’t want to watch Fox News.

Enough with the fucking nostalgia. The reason why we’re in such a shit position as a country is because we are terrified of the future and want to run screaming back to the last century. Knock it off, America.

Mikey, my 5 year old self is always in my body. I spent years trying to fight that part of me, but I never wanted to grow up. Even when I was actually five years old I realized what a bum deal that was.  I grew into adulthood kicking and screaming the whole way. I just didn’t wanna go, and I don’t really want to be an adult now, either. Not all the time anyway. So, how do I find relief from “adulting”? I consciously choose to do child-like things. I dress silly. I don’t take things all that seriously. I color, with crayons. I watch Paw Patrol and I love Disney movies. I love to read stories and have stories read to me. I listen to artists like Laurie Berkner, Trout Fishing in America, and Justin Roberts. I take at least two trips up to Knoebel’s every year and like an actual five-year-old I have to be dragged out of there while falling asleep on my feet because I never want to leave. I have a collection of over 40 stuffed animals and each one has a name and distinct personality. I cultivate play into my daily life, and not adult versions of play. Adult version of play is usually stuff that seems like work. I’m talking senseless stuff that you got yelled at for in elementary school, like daydreaming, singing nonsense out loud for no reason, making up your own words, getting down on the floor to play with toys. I look at adults who collect toys and leave them in boxes on a shelf like, the fuck are you doing? PLAY WITH IT. It’s more fun that way. It’s meant to be enjoyed, not stared at like a museum exhibit.

Now, I do know that as someone who is  actually 45, I have responsibilities and I can’t be five all the time. I kinda have to be my own parent and guide that youthful part of myself towards moderation and balance, but in many outward ways you can really tell I’m child-like. I make no effort to hide it whatsoever, and ironically, embracing that has made me a better-adjusted adult. I carry a lot less stress than I used to, and it really helps me live in the moment and find things to be joyful about or amazed at even during times where I am in physical pain, or depressed and melancholy. I don’t know if this would work for anyone else, but if you can just tap into your own inner five-year-old and be a goofy silly-hearted kid more often, I can’t imagine that would be a bad thing.

Last up, my Mom asked me for suggestions for good comedy series to watch on Netflix. I suggested Mindhunter. No, I’m kidding. She loves crime drama too. But anyway, I don’t usually watch comedy on Netflix unless it’s stand-up. So Ma, I want to recommend Patton Oswalt‘s latest special, Annihilation. Don’t be put off by the title. in it, he talks a lot about his late wife and how he and his daughter dealt with her sudden passing a couple years ago. It’s bold and touching, and even a bit edgy but not in the “try too hard to be edgy and just end up being an offensive dick” way. I think you’ll like it. It actually gave me one of my mantras that I use quite often: It’s chaos, be kind.